Ian Williams holds a record that no other trainer in the UK can claim; back in 2015 when Brasted won at Chelmsford Racecourse, Ian became the first trainer to have saddled a winner at every racecourse in the UK! Quite a phenomenal achievement.

Ian’s racing story goes all the way back to his teens, when he worked under the great Jenny Pitman as Assistant Trainer; alongside Martin Pipe and also a spell in France with Francois Doumen. He assisted in the success of Doumen’s yard; where the trainer won a couple of King George’s at the pinnacle of National Hunt Racing, the Cheltenham Gold Cup.

It was in 1997 that Ian entered solo into the training world, since then the show has got bigger and better. Ian currently has over 140 horses in training and the Alvechurch handler has become known in the racing world as one of the most talented dual purpose trainers in the country.

In recent years, Ian has also enjoyed success at the major racing festivals in both National Hunt and Flat scene. Ballyalton gave Ian his first Cheltenham Festival winner in 2016 when winning the Listed ‘Close Brothers Novices Handicap Chase’. In 2018, Magic Circle won the Chester Cup at the May Festival meeting, he then followed up with a win two weeks later in the Group 3 ‘Henry II Stakes’ at Sandown, before going down under to have a crack at the Melbourne Cup “the race that stops a Nation”. Ian then tasted his biggest flat success in 2019 at the illustrious Royal Ascot meeting when The Grand Visir defied top weight to win the Ascot Stakes. Ian also had the third placed horse in this race with Time To Study. 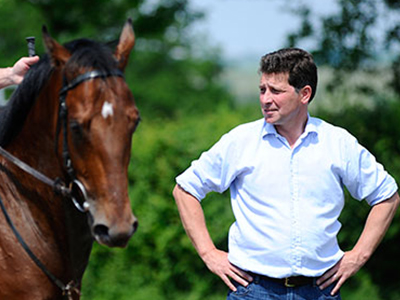